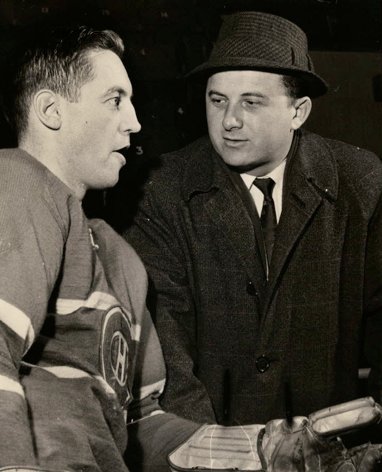 For today’s members of the Professional Hockey Writers’ Association, Red Fisher was a link to a different time. A time before the internet, when hockey writers wearing Fedoras wrote willowy prose on typewriters, quotes scrawled on a notepad and a cigar burning in a nearby ashtray. A time when reporters and players gained trust in each other, because they had enough one-on-one time to allow for such a relationship to be built.

Long before Twitter and blanket TV coverage, they were our only daily links to the teams we loved. People like Red, Frank Orr, and Dick Beddoes — if they wrote it, it was true. Period.

Since his first NHL game — the Richard Riots of March 17, 1955 — until very recently, Red chronicled the Montreal Canadiens. He covered the 1972 Summit Series, was an Elmer Ferguson Award winner, received the Order of Canada, and numerous National Newspaper Awards in Canada.

Red didn’t speak with rookies, and he never dealt in rumours. From Maurice Richard, to Jean Beliveau (right, with Fisher) to Dickie Moore to Glen Sather, the people Fisher worked with trusted him because he was a true pro. When he criticized them, they knew it was warranted. And when he praised them, it wasn’t for any other reason than their play and their conduct had earned that praise.

Tough, fair, crotchety and talented, Saul (Red) Fisher died Friday at the age of 91. He held PHWA card No. 1, was a founding member of our group and the father of Canadian hockey writing.

He was our leader too, and we recognize our top beat reporter with the Red Fisher Award annually.

You will be sorely missed, Red, but we thank you for the foundation you laid down for us.

— The Members of the PHWA