The Professional Hockey Writers Association is proud to announce Paula Duhatschek as inaugural recipient of the Jim Kelley Memorial Scholarship. 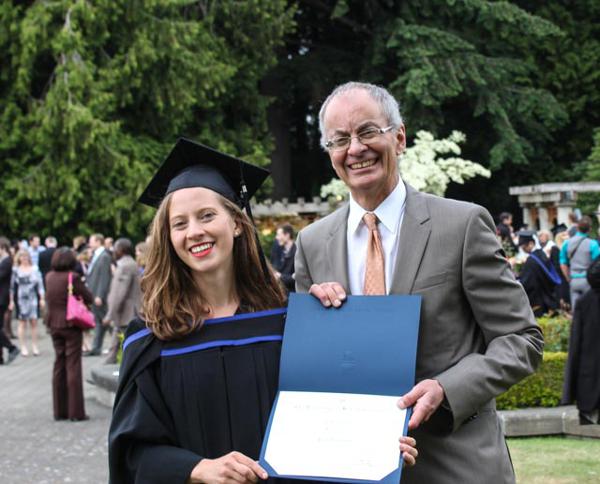 Duhatschek is the daughter of PHWA member and Globe and Mail columnist Eric Duhatschek. This particular award means a great deal to the Duhatschek family since Kelley was chosen to introduce Eric Duhatschek as the 2001 winner of the Elmer Ferguson Award at the Hockey Hall of Fame.

Paula Duhatschek met Kelley that day when she attended the luncheon in Toronto as an 8-year-old – but she was awarded this scholarship on blind merit. Duhatschek’s scholarship essay was voted the winner by a panel of six PHWA members; all names and identifiable references were redacted from submissions.

The field was extremely competitive: nine of the 13 entries received at least one vote. Duhatschek garnered the most first place votes.

“I am so excited, it is such an honor,” Duhatschek said. “It’s been an awesome shot of confidence to have won this scholarship, especially since the selection committee are all sportswriters themselves.”

As she wrote in her essay, Duhatschek’s interest in writing and journalism blossomed from a hobby into a calling with the discovery of her voice on the internet. Last year, this humor piece on The Toast received attention from the New Yorker, opening her eyes to new possibilities. It has been a journey full of both successes and rejections.

Duhatschek, 23, spent this summer working for the Canadian Mental Health Association in Vancouver. The Calgary, Alta., native recently graduated from the University of British Columbia with a bachelor’s degree. She will pursue a master’s degree in journalism from the University of Western Ontario this fall, some 39 years after her father began down the same path at Western.

“Because of my dad, I go into this with a clear-eyed view of the industry. There are no false expectations, I know how difficult it is,” Duhatschek said. “I think I am in a better position now, after researching and exploring other options, than I would be if I started with journalism right away. I feel like I know what I’m getting myself into. This money will make a huge difference in my tuition costs, so I really can’t thank the PHWA enough.”

The Jim Kelley Memorial Scholarship was established in 2016 to honor the memory of past PHWA president Jim Kelley, a gifted Buffalo News columnist who passed away in 2010 after a brave battle with cancer. Kelley was the 2004 recipient of the Elmer Ferguson Award at the Hockey Hall of Fame for excellence in hockey journalism.

The one-year, $1,500 USD scholarship is awarded exclusively to the son or daughter of a PHWA member who is actively enrolled in college or university-level study.

Duhatschek’s winning entry (below) answered the prompt: How did your parent’s career as a hockey writer shape your future and goals for your own career?

Before I was old enough to write for myself, my dad used to write for me. As a sportswriter, he was an early adopter of the home computer, and owned a grey Macintosh roughly the size of an industrial microwave. Our main father-daughter project in those days was to write stories based on David Adler’s Cam Jansen mysteries: a series of middle-grade books about a detective who solved crimes using her photographic memory. Equipping a six-year-old with a ghostwriter worked out basically as you might expect, and our joint efforts resulted in some pretty outrageous fan fiction. In our retellings, Cam was reduced to a sidekick, and the book’s secondary characters now stood in slack-jawed amazement at the accomplishments of her new best friend, Paula. Although I wouldn’t necessarily want to re-read those stories now, those computer sessions are some of my sharpest and fondest childhood memories. Working with my dad was my first experience in producing a piece of writing, and it helped me develop an early appreciation for storytelling as both a reader and a writer.

A few years later, my dad bought a new laptop and the Macintosh migrated to our basement rec room. My older brother and I had suddenly had free reign over the computer—a privilege that now seems shocking. Luckily for my parents, we were nerdy kids and didn’t get up to anything particularly interesting with our unrestrained Internet access. For my part, I abandoned the Cam Jansen mysteries, but continued to devote myself to reading. Although I still enjoyed young adult novels, I found a new love in online magazines. From the seventh grade onwards, I read Seventeen.com devotedly, before later graduating to Slate and The Globe and Mail. During this time, I developed habits that stick with me today: when I have a free morning, I’d still rather read up on The New Yorker than watch Netflix, and I rarely develop an opinion on the American election without consulting The Atlantic for reference. Years later, it may not be a surprise that I now want to be a journalist as well.

However, it wasn’t always a given that I would pursue this path. In university, I instead majored in history and explored possibilities through my school’s arts co-op program. I wound up working in corporate communications with a national non-profit, learning how an organization communicates its messages over multiple platforms. I became adept at writing in a professional setting, and producing clean copy to deadline while sharing an office with four other people. In my spare time, I also began to pursue writing opportunities wherever I could find them. I became a staff writer with my school paper, and took a remote editorial internship with an online magazine. I also began to do some freelance work, and pitched and wrote articles for The Toast, The Awl, and —my biggest coup—Vice News. That publications with a bottom line would pay me for something that I’d both conceived of and written on my own was an immense source of pride, and made me feel for the first time that writing was something I could pursue as a career.

Along the way, my dad’s support has meant the world to me. While I’ve had some successes, I’ve also had a lot of rejections. Still, he always notices when I’ve written something new, and takes the time to send me a note of congratulations. He takes my goals seriously, and he follows me on Twitter. It’s hard to overstate the importance of having a real journalist believe in my writing, but I don’t think that I would have the confidence to aim for this career if it weren’t for him. A well placed “that was good” means a lot coming from him, and gives me hope that someday I might be great.

To that end, I have decided to pursue further education on the subject. Buoyed by my dad’s support, this fall I will be attending the University of Western Ontario for a Master’s in Journalism, thirty-nine years after he did the exact same thing. And although the Cam Jansen stories now make me cringe, I’m grateful to my dad for that first opportunity to write, and for his ongoing support as I’ve staggered along in his footsteps. Just as you need to walk before you can run, I suppose I needed to write some bad fan fiction before I could hope to create real journalism.

The PHWA wishes to thank and congratulate all 13 students who submitted an entry for the 2016 Jim Kelley Memorial Scholarship. Best of luck during the school year.