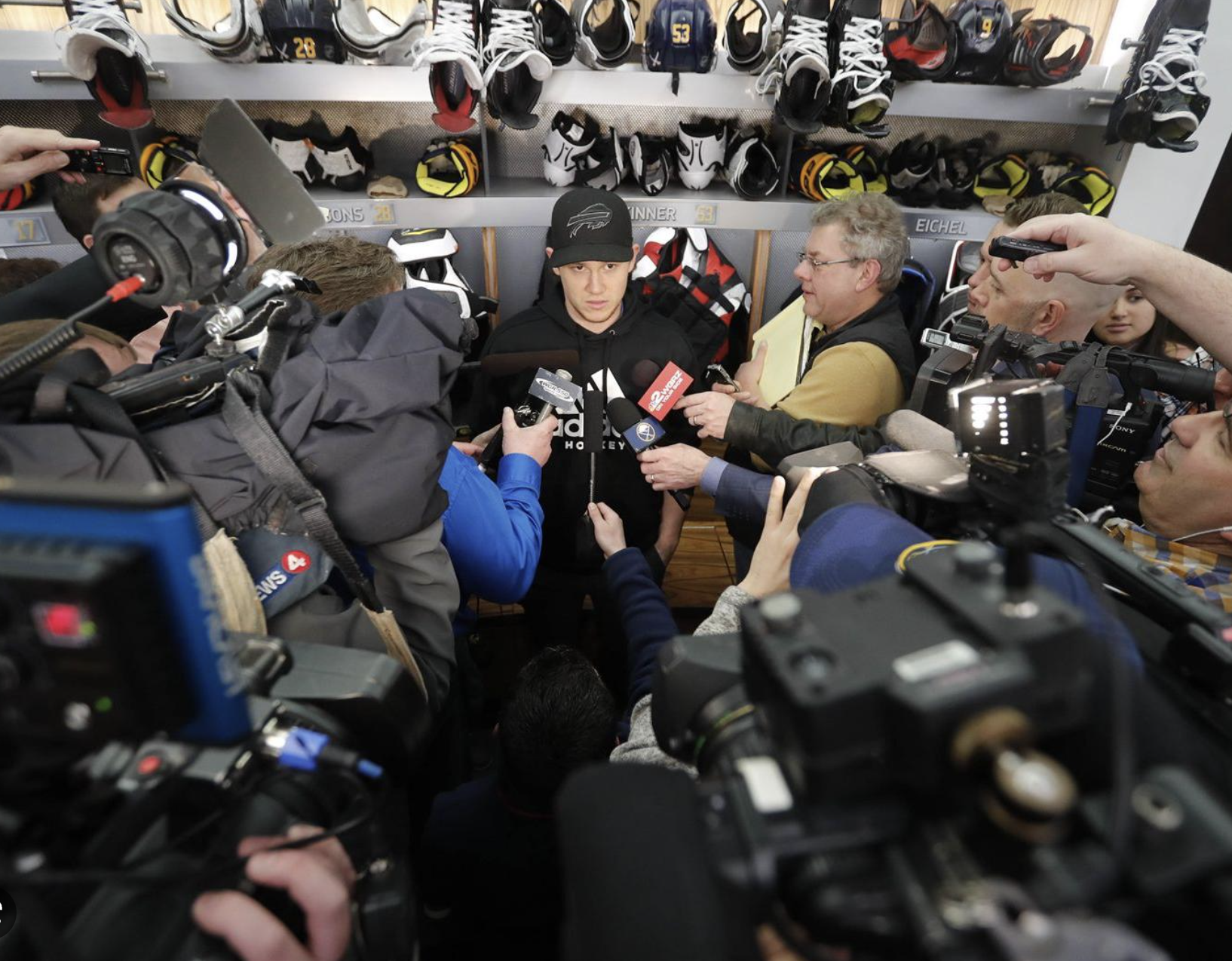 When sportswriters formed the National Hockey League Writers Association in 1967, it’s doubtful they anticipated that members would someday need to know how to storm a castle.

On Feb. 4, 1987, the organization’s president Scott Morrison (Toronto Sun) and a platoon of writers pushed past security and into the Toronto Maple Leafs post-game dressing room in violation of owner Harold Ballard’s edict that no media was allowed.

Even players were miffed that they had to do interviews in the hallways.

“It was brutal,” Morrison said. “There would be a lot of nights on the road where you would be in a barn like St. Louis Arena and [Maple Leafs public relations director] Bob Stellick would have to drag guys out of the room wrapped in a towel and nothing else. They were in filthy hallways in the bowels of arenas. The wind would blow through. Players were tired of it. None of us were getting any one-on-ones. We weren’t getting any traction complaining to the league.”

At the Cyrano bar in Toronto, Morrison met with the sports editors of all of the Toronto newspapers, plus the Hamilton Spectator. The battle plan was drawn up.

Not sure how anyone was going to react, writers steeled themselves like they were preparing for a street brawl.

“I remember saying to the late Tony Fitz-gerald before we went in, ” Hornby said, “I’ll see you on the other side.”

They pushed through the door in two waves: Morrison led the writers and then the radio and television people, not knowing exactly what was happening, formed the second attack force.

As everyone fanned out to conduct interviews, players began to laugh. “They thought it was a hoot,” Morrison recalled.

According to Hornby, Salming asked: “Is this Christmas?”

Not everyone thought it was funny. Ballard had his assistant wheel him down to meet the invaders. He was cursing and waving his cane. “He swung it at a Toronto Globe and Mail photographer,” Hornby said.

Now 33 years later, veterans of that skirmish say the most amazing aspect of the charge of the writer’s brigade, is that people kept the plan secret. “That’s really hard to do in Toronto,” Hornby said.

Later, Morrison said he “semi-apologized” to Stellick “for putting him in a bad position.”

Stellick had always been sympathetic to the writers’ position, but couldn’t do anything about it. But Morrison felt strongly that the writers had to do something bold.

Stellick had wondered why this Los Angeles-Toronto game on a Wednesday had drawn so many writers. Each paper had three or four people at the game. The press box was full.

“Stellick told me, “I couldn’t figure it out,” Morrison recalled.

The daring raid on the Maple Leafs’ dressing room didn’t immediately fix the problem. It was back to interviews outside the dressing room, with more security, at the next Toronto home game. “But it got the league’s attention,” Hornby said.

Morrison said NHL public relations director Gary Meagher, who was sympathetic to the writer’s cause, helped facilitate a meeting with NHL president John Ziegler at the draft. It was agreed that the league would change the bylaws to prevent Ballard, or any other owner, from using them to deny access.

The NHLWA, later renamed the Professional Hockey Writers Association, was formed with the idea that unity would give writers more strength in dealing with the NHL on problems. That turned out to be true, particularly in the early years of the organization.

Nashville Predators senior vice president Gerry Helper started as a public relations person with the Buffalo Sabres in 1979 and recalls the “PHWA had a fair amount of influence at that stage.”

In 1979, the NHL had grown from 17 to 21 teams by annexing World Hockey Association teams.

“If you think back about how fans got their information, it was through the writers,” Helper said. “So the writers carried a lot of clout. If the PHWA said, we need x amount of phones in the press box, the league and teams really worked to make that happen.”

In the early years, making sure women were allowed into the locker room, and treated appropriately, were always significant issues, even as late as the 1980s.

To put this issue into perspective, consider the PHWA didn’t allow women to join the organization up until the mid-1970s. Robin Herman (New York Times) was the PHWA’s only female member when she became the first woman to enter an NHL dressing room at the 1975 All-Star Game in Montreal.

“It was a sideshow for all terrible reasons,” said 2019 Elmer Ferguson winner Frank Brown, who was working at the game. “Which players were going to wear a towel and which ones weren’t? Was there going to be a scene at the doorway.”

Brown said Herman would have much preferred to just do her job without the spotlight.Her groundbreaking locker room appearance didn’t instantly transform the NHL dressing rooms into a female-friendly place.

Helene Elliott (Los Angeles Times) began working professionally at the Chicago Sun Times in 1977 and then went to Newsday in 1979 before moving to the LA Times in 1989. How difficult was it for women?

She said there were dozens of times when she had to overcome impediments to do her job.

“For a long time, the NHL let teams set policy for locker room access,” Elliott said. “There was no blanket edict from the league. That created a lot of problems. There were so few female sportswriters that we used to give each other tips. We would say such and such team is friendly, or say this team is going to be really tough, or avoid so and so or so and so will be really helpful.”

Duhatschek, a PHWA vice president for a decade, said Morrison did a lot of “the heavy lifting” formalizing access rules, including how female journalists were going to be treated in the NHL.

According to Duhatschek, NHL PR executive Gary Meagher was a PHWA ally in trying to firm up access policy.

“Those two worked together to do a lot of good in terms of developing policy and putting in firm rules,” Duhatschek recalled.

Their work was much needed. “People like Harold Ballard and Phil Esposito were not very welcoming to women,” Duhatschek said.

Duhatschek said the situation improved dramatically when Gary Bettman became the first NHL commissioner. “The foot dragging on policy stopped,” Duhatschek said. “Back then, he was very helpful to the Professional Hockey Writers Association.”

Elliott has an important place in PHWA history, because she is the only woman ever to serve as the organization’s president and the only woman to be honored by the Hockey Hall of Fame with the Elmer Ferguson Award.

She was president when PHWA members voted to stop accepting a $10,000 fee from the NHL for voting on NHL Awards. The money was partially used to fund a scholarship. The Associated Press Sports Editors (APSE) had been pushing the PHWA to stop taking the stipend.

“I thought it was the right thing to do to stop taking the money, but it got really, really ugly,” Elliott recalled.

Not every member agreed with that decision. “It was hard,” she said. “A lot of us were told by our employers that we could not continue to be members if the (PHWA) continued to take money from the league.”

The voting procedure changed dramatically in 2003-04 when the PHWA expanded the pool of eligible voters.

Prior to then, each NHL city only had two votes. Writers would split votes. Some writers would vote only for the Hart Trophy or Norris Trophy. Another writer would vote on All-Star teams. Some highly qualified voters received no votes at all.

The problem with that process was that too few people were determining winners. If people forgot to vote, 60 votes would drop to 58 or 57. If someone left an obvious choice off his or her ballot, it could have a significant impact on the outcome.

It also meant some highly qualified voters – national coverage reporters – received no votes at all.

Plus, it was possible, under this system, that a center could win the Hart Trophy and not be named 1st team All-Star center because different groups were voting on those two honors.

Team officials preferred the old system because it had geographic balance. Every city received two votes. It seemed fair to old school executives.

But the PHWA approached the NHL about accepting that a qualified voter is a qualified voter regardless of where they live. The PHWA group argued that increasing the number of voters diminished the impact of outliers.

In days gone by, it made sense to limit the number of voters. You didn’t receive much information about what was happening in other NHL cities. In today’s technology world, a New York sportswriter knows as much about Los Angeles, Arizona and Vancouver as he or she knows about their old team.

Today, the PHWA has almost three times as many voters as it had in 2002-03. The results have shown that this voting system, with a larger sampling of quality voters, works effectively.

Not all of the PHWA history is as serious as voting issues and bold protests. Not every issue needs to be debated with passionate rhetoric. Duhatschek tells the story of how an off-hand suggestion by a part-time writer led to a change in NHL Awards.

In the early 1980s, Jack Newman was the Sports Information Director of the University of Calgary. He also worked as a stringer at Calgary Flames’ games for the Canadian Press. That earned him the right to join the Calgary chapter of the PHWA.

“He said to us, ‘Why don’t we have an All-Rookie team?'” Duhatschek said. “He said baseball had one.”

Duhatschek told Newman he didn’t know the answer, but he would take the suggestion to the national meeting.

“I told our secretary-treasurer Don Wilno and he said: We never thought about it, but it’s a great idea,” Duhatschek said.

The NHL All-Rookie team was introduced the following season, in 1982-83. Newman was in the PHWA for a short time. But he had a lasting impact.